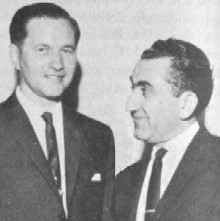 Paul Keres and Tigran Petrosian shared first place honors at the First Piatigorsky Cup Chess Tournament. Touted as the biggest tournament on American soil since Dallas 1957, the tournament took place at the Ambassador Hotel in Los Angeles, California from July 2nd to July 30th, 1963. The event was organized by Jacqueline Piatigorsky, the wife of famed cellist and chess enthusiast Gregor Piatigorsky.

The original plan for the tournament was to have it every two years, consist of eight world caliber players (with no more than two from any single country), and to be played in a double round-robin format. Soon after invitations were sent, the Soviet Union announced that Petrosian and Keres would be representing them at the tournament. This marked the first time in 30 years that a reigning world champion would be playing in an American tournament, as Petrosian had dethroned Mikhail Botvinnik earlier in the year.

Samuel Reshevsky and Bobby Fischer were sent invitations to represent the American interests in the tournament. Fischer declined the invitation for unknown reasons. It was quietly rumored that he chose not to participate due to the fact that he did not receive his requested appearance fee of $2000. Pal Benko ended up taking the second American spot in Fischer’s stead. The remaining four spots were accepted by Miguel Najdorf and Oscar Panno of Argentina, Svetozar Gligoric of Yugoslavia, and Fridrik Olafsson of Iceland.

The tournament had it’s difficulties as Reshevsky and Keres both came down with the flu in the early stages of the event. This resulted in some postponed games and a more strenuous schedule for the players. Keres had just adjourned two games in winning positions (against Benko and Panno) when it was announced that he had fallen ill. In a great act of sportsmanship, both players immediately resigned their games to him. 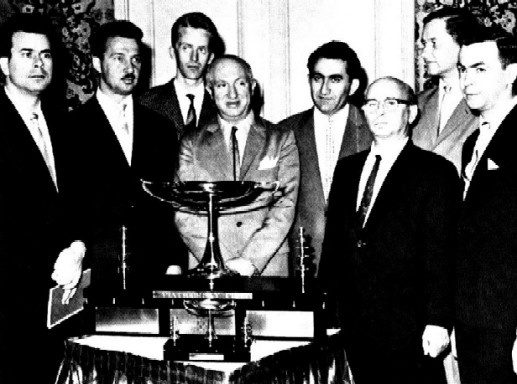 At the half way point of the tournament there was a complete log jam for first place, with Gligoric, Najdorf, Keres, and Olafsson all tied at 4½ points each. Petrosian and Reshevsky were only a half point behind them, with Benko and Panno bringing up the rear at 3 points each. Petrosian would have a strong second half and Keres would overcome his illness to force a tie for first place with the current world champion. Panno proved to be the workhorse of the tournament, playing a tournament high 645 moves. This included a 111-move marathon game against Petrosian in the fourth round which ended up being drawn.

Approximately 500 spectators were able to witness each round. The closing ceremony and awards banquet was held at the Beverly Hills Hotel on July 30th with a little over 200 people in attendance. Isaac Kashdan was the chief arbiter of the tournament and later wrote the official tournament book.