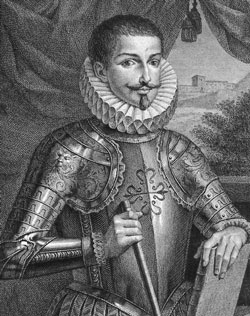 Alessandro Salvio was an Italian chess player who was considered by many to be the 4th unofficial world champion between the years 1598 and 1620.  He started an Italian chess academy in Naples, Italy, and wrote a book called Trattato dell’Inventione et Arte Liberale del Gioco Degli Scacci, which was published in Naples in 1604.  He also wrote Il Puttino,  published in 1634.

He belonged to a rich family which allowed him to study and obtain the title of doctor.  His brother was a somewhat famous poet who dedicated some published verses to him.  His victory over Pablo Boi just before the year 1600 was the feat that gained him praise as the best player in the world.

He frequented the Napolitana Academy and the chess house of Constanzo Carafa, where he gave several blind exhibitions.  As a result of these performances, he was asked to perform in the presence of the Count of Benavente, the Marquess of Corleto, Count Francisco de Castro, the Count of Lemos, and even of the Pope of Rome.

In 1604 he dedicated his “Treaty of the Liberal Invention of the Game of the Chess” (translated from the Italian) to Flucio de Constanza and the Marquess of Corleto.  He additionally wrote biographies on the great players of his time (Leonardo di Cutri and Boi).

The Salvio Gambit (1.e4 e5 2.f4 exf4 3.Nf3 g5 4.Bc4 g4 5.Ne5 Qh4+ 6.Kf1) is one of the lines for which Salvio is famous and is the foundation for today’s widely used King’s Gambit opening.  His publishing’s on chess openings and on chess analysis of other players of the era were widely used and very popular up until the end of the 18th century.

Below is a game evaluated by Salvio in J.H. Sarratt’s The Works of Damiano, Ruy Lopez, and Salvios on the Game of Chess of which he leaves unfinished with the assertion of an inevitable white victory.