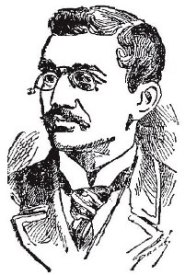 Emanuel Lasker gave an interesting interview in the December 18th, 1892 edition of the Washington Post. He discussed many chess related topics, mostly going in depth on the subject of blindfold chess play.

Also included are some fascinating stories about Paul Morphy and Louis Paulsen. The interview is shared in whole below:

“Someone asked me the other day how I kept in practice. My answer will probably appear quite as curious to the general reader as it did to this questioner; I don’t practice. The truth is that the best preparation a professional player can make for a match game is to give up playing for a short time; go to a quiet seaside resort, or back in some secluded nook among the mountains, enjoy himself out-of-doors and not give any thought to chess.

Playing the game is a considerable strain on a man, and he will find (at least in my experience I find) that he will play best after he has spent some time in relaxation and given no thought to chess. This is a kind of contest where you do not ‘train’ before hand. Of course, I occasionally, in my idle season, play a game for amusement as one would indulge in a game of skittles or cards. The professional match games which constantly take up my time (no less than sixty-four this year) give me all the practice I need, and the same may be said of other leading players.

I cannot say that I feel particularly nervous or over-strained after playing for several hours. But I exercise ordinary precautions in regard to my work, if professional chess playing can be called work. And I do not know of any famous chess players who have suffered from nervous prostration as a result of playing match games. When Paul Morphy was in London and played against the leading experts of his day, on one occasion he sat almost immovable for ten hours, without having tasted a morsel of food, or even drank a drop of water during that time. And yet, it is said that when he rose from the contest, which it was declared was worthy of being inscribed in letters of gold on the walls of the London Chess Club, he looked, apparently, as fresh as when he sat down. The next morning he rose at 7 o’clock and told his friends that he was willing to continue the match with other contestants.

It is said, and, I think, truly, that chess has the effect of educating and strengthening the will power. This theory, at all events, is illustrated by an anecdote of Morphy. It seems that during the engagement in London he one day very inconsiderately took a nap in his sitting room, with the window open. On the arrival of a friend who awoke him, he complained of feeling cold. The next morning he was feverish and really unfit to meet Horowitz, one of the leading players of that day. But the friend could not induce Morphy to remain in his room. ‘I would sooner,’ said the great player, ‘lose the game, than anybody should think I had exhausted myself in playing, as some people will do if I am absent at the proper hour.’

During his stay in France he constantly labored under bodily suffering. On the morning of his famous blindfold exhibition he said to a friend ‘I don’t know how I shall get through my work today. I am afraid I shall be obliged to leave the room and some evil minded person may think I am examining positions outside.’ In spite of this indisposition he played for ten hours, making combinations which, at that time, had never been surpassed.

When Paulsen played a blindfold game against ten antagonists in London he was engaged without interruption for twelve hours. He never rose, never ate, never smoked, and drank nothing but a little lemonade.

Playing chess blindfolded, like most wonderful things in the world, is not new. The Arabs played in this way as early as the seventh century. At that time the chess board was not laid out in black and white squares and it must have been more difficult to remember the moves than it is at present.

When I play simultaneously, several blindfold games of chess the requisite number of boards are placed on a large table, each board bearing a number and representing one of the players with whom I am contending. A ‘teller’ or clerk is in charge. One of the players makes a move, which the teller names, and directs me to play on such a board; and I respond by naming my move, according to the English method of naming the squares already referred to, the same course being pursued with the other boards as their players make moves and their numbers are called out.

It is not possible, I suppose, to explain how blindfold chess is played any more than it is possible to explain why one man writes poetry and another does not. In other words, the ability to play chess blindfold may be considered as a special gift. To play chess blindfold – to keep in mind not only your own moves, but those of your opponent – requires a peculiar turn of mind and an excellent memory for location. Nor is it possible to cultivate this power by any great extent by practice. If you are not endowed with it at the onset (at least in some degree) there is no use in trying to cultivate it. The common adage that ‘practice makes perfect,’ so true as to nearly all the efforts of life, is not applicable to playing chess blindfold. Success in this field is not so much a matter of memory. It comes from intuition.

The difficulties of a blindfold game of chess can be briefly explained for the benefit of the class represented by a gentleman who said he found it ‘hard work to play with his eyes open.’ Paulsen, in playing with ten persons, made 250 moves in twelve hours, an average of 27 per game. This gave two minutes and a quarter for the consideration of each move. As all his moves were met by corresponding moves on the part of his antagonists, he was called upon to form 570 complete mental pictures in twelve consecutive hours, each picture representing the exact mode in which all the sixty-four squares in a chess board were occupied.

Compared with the blindfold game, playing chess by telegraph is a very simple affair. A certain sign is provided for each square in the board and the game is then carried on like a face-to-face contest. But a contest of this kind created considerable excitement in London in 1845, when the telegraph had just been introduced. Staunton and Walker played such a game at the two termini of the Southwestern Railroad. The leading papers considered it wonderful that the moves should be reported with such regularity and conveyed uninterruptedly for a number of hours. One editor of a prophetic turn of mind gravely argued that there was no reason why other important events should not be communicated at the same instant throughout the entire kingdom.”

Just prior to the interview, Lasker engaged in a double-blindfold game against Maryland champion W.H.K. Pollock on November 29th. The game was contested before a large crowd at the Maryland Chess Club in Baltimore and came down to an exciting race of opposite pawns to the Queening square.