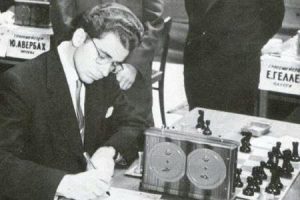 Boris Vasiliyevich Spassky was born in Leningrad, Russia on January 30, 1937. He learned how to play chess when he was five years old and achieved the rank of International Master by the young age of sixteen. He was mentored in the early stages of his career by famed Soviet grandmaster Alexander Tolush.

In 1955 Spassky won the World Junior Championship in Antwerp, Belgium. That same year he attained the title of International Grandmaster (the youngest ever at that time) and qualified for his first Candidates tournament (tying for 3rd-7th). Over the next few years Spassky had some encouraging results, but also had his fair share of heartbreaking losses and too many second place finishes for his liking.

After much deliberation in the summer of 1961, Spassky parted ways with the aggressive methodology of Tolush and joined up with the strategist Igor Bondarevsky. The change in coaching philosophies paid immediate dividends, as Spassky won his first USSR Championship in December of 1961. He tied for first in at the same event in 1963, losing a playoff to eventual winner Leonid Stein.

At the 1964 Interzonal in Amsterdam, Boris tied for first place with Mikhail Tal, Bent Larsen, and Vasily Smyslov. He went on to defeat Paul Keres (+4 -2 =4), Efim Geller (+3 -0 =5), and long time nemesis Tal (+4 -1 =6) at the 1965 Candidates tournament, qualifying him as the next challenger to Tigran Petrosian’s world championship title.

The 1966 World Chess Championship match took place in Moscow, with Spassky losing by the most narrow of margins (+3 -4 =17). Undeterred, Boris would bounce back at the very next Candidates cycle in 1968, marching through his opponents (Geller, Larsen, Victor Korchnoi) to immediately earn another shot at Petrosian.

The 1969 re-match was very similar to their previous encounter, in that it was fiercely contested and close all the way to the end. This time Spassky prevailed, winning by a result of 6 wins, 4 losses, and 13 draws (game nineteen of the match is shared below). After many years of determination and struggle, he was finally the World Chess Champion …. but for how long?