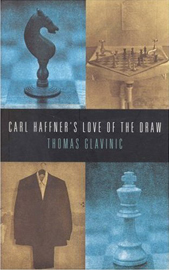 Austrian author Thomas Glavinic produced a book in 1999 entitled “Carl Haffner’s Love Of The Draw”. The book is predominantly a fictional account of the 1910 match for the world chess championship between Emanuel Lasker and Carl Schlechter. The main character in theory is Schlechter, but his name has been changed to Carl Haffner for the purposes of the book. All other players (Lasker, Albin, Janowski, etc.) and accounts of the match seem to be mostly factual.

The story begins with the preparations for the world title match to begin in Vienna and to conclude in Berlin. Viennese writer and chess columnist George Hummel is one of the main characters and a devout fan of Haffner. His belief that Haffner’s defensive genius at the chessboard will hold Lasker without a win is reiterated throughout the book.

Between most of the match games, Glavinic goes back in time to describe the childhood and upbringing of our main character. He also proceeds to give a background on his chess career, from moments as a child prodigy in the coffee houses of Vienna to winning equal first with Harry Nelson Pillsbury at the 1900 Munich tournament. Details which explain the events leading up to Haffner’s tile shot against Lasker are also given at various points of the novel.

The author paints a picture of Haffner as a kind, shy, unassuming man with a chess style built for defense and consequently, for draws. Throughout the book you notice that Haffner’s health steadily deteriorates, both during the match and afterwards. Some explanation of this is aimed at the stress of the match itself, as well as the fear that he might actually be victorious and have to deal with the rigors of being world champion. It is almost implied throughout the story that he actually has no interest in winning the match.

One of the more often used minor characters is Anna Feiertanz, who was drawn to the match and to Haffner from a newspaper article that she had read leading up to the match. Her interaction and flirtation with Haffner keep you slightly entertained. Anna is a woman who performs several odd jobs to make money and eventually accompanies Haffner to Berlin to act as correspondent for the absent Hummel.

I am very curious as to how much of the background stories are facts and which are fiction. The portrayed atmosphere of both the cafes and the actual playing sites are very intriguing. Not knowing much about Schlechter previous to reading this book, I had no idea that his life and final days painted such a sad picture. It immediately brought to mind the sorrowful tales of both Paul Morphy and Wilhelm Steinitz.

I will say that the childhood stories seemed to drag on a little too much and at times, caused me to temporarily lose interest in the book. I also felt that the actual chess games could have been discussed in greater detail. Glavinic later accomplished this with the tenth and final game of the match. He made several references to particular moves and actually made me want to pull the game up and follow along.

Other than the couple of minor negatives mentioned, I felt that the book was a good purchase and I’m sure that I’ll pick back up and read it again one day. It definitely fueled my interest in Carl Schlechter and I’m confident that you will be seeing some of his historic games on this site in the very near future.

Schlechter’s lone win in the match occurred in the fifth game on January 22nd, 1910 and is shared below with analysis from the great Jose Raul Capablanca.

This was the last game played in Vienna, with the remainder of the match being contested in Berlin.