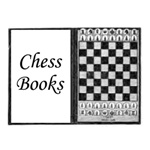 When I first heard of actor Heath Ledger’s recent and unfortunate death, I was very sad as he was one of my favorite movie actors. His performances in “A Knight’s Tale” and “The Patriot” were remarkable and have lured me […]