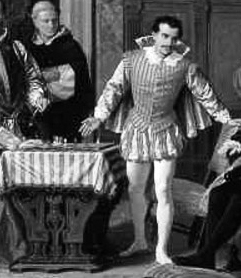 Giovanni Leonardo was born in Cutro, Calabria. He studied law in Rome. In 1560, he lost a match to Ruy López in Rome. In 1566-1572, he traveled and played chess in Rome, Genoa, Marseille, and Barcelona. He had played many times against Paolo Boi in Italy and they were regarded as being equal in their chess strength.

He won the first known international master tournament in the history of chess in Madrid in 1575, therefore becoming the strongest chess master of the time. After their success at the Court of Spain, Leonardo and Boi both traveled, although separately, to Lisbon, where they tested their chess skill against Il Moro, the eminent chess champion of King Don Sebastian, of Portugal. Again, they both succeeded, first Leonardo, soon followed by Paolo Boi, in defeating Il Moro.

And again the King was generous with his rewards. After this triumph, Leonardo, having been called the wandering knight (Il Cavaliere errante) by King Don Sebastian, left Portugal to return to Italy and settle in Naples where he became the chess master for the Prince of Bisignano.