The Manchester (England) Chess Club had been a prominent foundation throughout the 1800’s and was the meeting place in 1890 for the formation of a larger chess organization that consisted of 24 Cheshire and Lancashire chess clubs. In the early part of 1890, the recently reformed British Chess Association was reportedly speculating on having their Sixth Chess Congress in conjunction with the Manchester Chess Club. Debates ensued over each entity putting up half of whatever prize money was to be awarded.

On July 27th a meeting of the British Chess Association council was held at the British Chess Club. At this meeting, it was officially decided (under the presidency of George Newnes) to have the tournament at the halls of the Manchester Athenaeum. The total prize money was to be £300 (pounds), with each organization contributing half of the sum. Manchester Chess Club president J.P. Reyner would host the event and would also chair the Executive Committee for the tournament.

The tournament was slated to take place Monday, August 25th through Monday, September 8th and to consist of eighteen players. In the weeks leading up to the tournament, several names were rumored to have committed to playing in Manchester, but did not make the trip for various reasons. Some of them may have been refused based on the amount of entries that were received before them. This list of known masters included Jackson Showalter, Mikhail Tschigorin, Jacques Mieses, Emanuel Lasker, Amos Burn, Curt von Bardelben, Max Harmonist, Johann Bauer, Max Weiss, and Alphonse Goetz.

World champion Wilhelm Steinitz was retired from tournament play in 1890, so he would not be making an appearance. Joseph Henry Blackburne had been ill with bronchitis, but still committed to play. Henry Edward Bird was fighting old age and a serious case of gout, yet was still rumored to attend. The American champion, Captain George Henry Mackenzie, had been ill with cancer for quite some time and had not played competitively since taking second at Bradford in 1888. He even missed the Sixth American Chess Congress in his hometown of New York the previous year. Word was getting around that Mackenzie was feeling better and that he would be leaving New York for Manchester at the end of July.

The overwhelming responses of players wanting to compete at Manchester forced the Tournament Executive Committee to eventually expand the field to twenty players. The final roster of competitors was as follows:

The format for the tournament was not for the weak of heart. Daily game times would be 12:00pm – 4:00pm and 6:00pm – 10:00pm, with Sundays being an off day. Three games would be played every two days, with the evening session of the second day being reserved for the completion of adjourned games. Each player would play everyone once, for a total of nineteen games in thirteen days of play.

The Manchester Athenaeum was an impressive building, housing several different types of organizations and managed by a board of directors. Chess contests previously held here included the 1882 Counties Chess Congress and the matches between Yorkshire & Lancashire in both 1884 and 1889.

The opening ceremony of the tournament took place on the same day as the first round was to begin, Monday, August 25th. Nearly all of the players were present at an early hour in the concert room of the Manchester Athenaeum, as well as several spectators. The drawing of numbers commenced at 11:30am and subsequent pairings were announced. Shortly after this, Mr. Bird arrived at the room to a thunderous applause. Bird was the well-known veteran and a definite crowd favorite. Opening play would begin later than planned (at approximately 12:30pm), due to lengthy speeches and the drawing of numbers.

After the first four rounds, Mason and Bird were the leaders at 3 ½ points and scheduled to face each other in the fifth round. Tarrasch, Mackenzie, and Blackburne were all close behind with 3 points each. Mason would eventually prevail over Bird in their fifth round matchup against his opponent’s Sicilian Defence, leaving him in sole possession of first place. The loss was the start of a three game losing streak for the elderly Bird, who quickly fell off the lead. Mason would not suffer his first defeat until the eighth round, at the hands of the also unbeaten Tarrasch.

At the halfway point of the tournament, Tarrasch and Mackenzie would have a memorable showdown of tournament leaders that ultimately led to an 80-move draw. This allowed Mason, with his tenth round win over Mortimer, to sneak back into a tie with the leaders. Blackburne would suffer a loss at the hands of Bird to drop back into fourth place by himself. The tournament standings (notwithstanding the timing of adjourned games and their completions) after the tenth round were as follows:

Just past the midway mark, Tarrasch quickly took sole possession of the lead with victories in four of the next five rounds and started to distance himself from the field. Mason losses to Von Scheve (13th round) and Gunsberg (15th round), coupled with a Blackburne loss to Taubenhaus (14th round) would contribute to the German having a full two and half point lead after fifteen rounds.

In addition to all of this, the strain of the tournament schedule seemed to finally catch up with the ailing Mackenzie. After being amongst the leaders for the first half of the tournament, he would suffer uncharacteristic losses to Lee (11th round), Tinsley (13th round) and the cellar dwelling Van Vliet (14th round).

A Tarrasch win over Blackburne (16th round) combined with a Mason loss to Owen (17th round) clinched the tournament victory for Tarrasch, giving him a full three point lead over the field with two rounds remaining. The final tournament standings played out as follows: 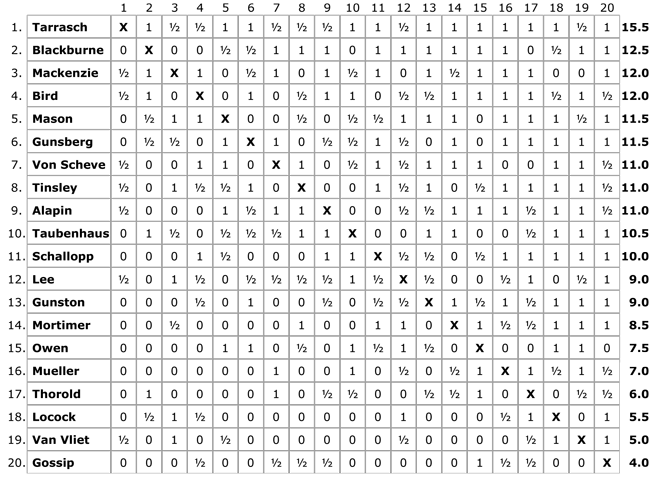 After the conclusion of the tournament, Steinitz wrote an article in the October 1890 issue of International Chess Magazine called “Ground Swell from the Manchester Congress”. He wrote of the conditions of the playing hall at the Manchester Athenaeum:

“For one thing, many of the players complain of the unfavorable climatic conditions of Cottonopolis* and the bad ventilation and awkward situation of the place of play.”

“It is true that Manchester is too often covered with a black pall of clouds and a drizzly rain falls, and it is certain that seventy-five weary steps had to be climbed in order to reach the tournament room, and that when it was reached, the atmosphere was hot and too often stifling.”

It is entirely possible that these playing conditions affected the aforementioned players with certain illnesses (Bird, Blackburne, Mackenzie).

* The term “Cottonopolis” is often used for the city of Manchester, England in reference to its metropolis of cotton and cotton mills.