During Paul Morphy’s famous European adventures in 1858, he made several stops at the infamous Cafe de la Regence in Paris, France. The cafe had always been an important centerpiece in chess history, as most of the previous greats had played there at one time or another. Francois-Andre Danican Philidor, Legall de Kremeur, and Adolf Anderssen are just a few names to play at the famous cafe. It has also been documented that Benjamin Franklin, a noted chess enthusiast, played there on occasion while serving as American ambassador to France during the Revolutionary War. 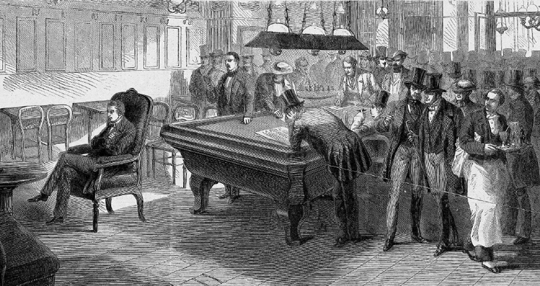 One of Morphy’s encounters at the cafe involved him playing eight of the strong cafe regulars in a blindfold simul in the presence of approximately 250 chess fans. After ten hours of play, Morphy had amazingly won six games, drawn two, and lost zero. It was reported that Morphy never took a break and did not even appear fatigued at the conclusion of play. One of his games from this event is presented below, as annotated by Johann Jakob Lowenthal.