Reuben Fine gave an impressive performance to win the 1948-49 international tournament in New York (USA). The event took place at the Manhattan Chess Club from December 23rd, 1948 to January 2nd, 1949 and oddly enough, did not take days off for either Christmas or New Year’s Day.

The tournament was arranged in a spontaneous manner by the Manhattan Chess Club organizers when it was discovered that Fine, Gideon Stahlberg, Max Euwe, and Miguel Najdorf would all be in New York in December of 1948. The vice president of the club, Sidney F. Kenton, quickly organized the event and managed to raise $5800 in prize money.

Stahlberg could not manage to work the entire event into his calendar, so he had to decline the offer. American Samuel Reshevsky seemed like a logical alternative, but simply said that he would not play. Herman Pilnik of Argentina found out about the tournament and notified the organizers that he would indeed participate if invited. Rounding out the group of ten participants were Americans Herman Steiner, George Kramer, Isaac Kashdan, Arthur Bisguier, Arnold Denker, and Israel Horowitz.

The draw was held on December 18th and the time controls were explained as 20 moves/hour to be controlled after the first two hours, then after each hour. The players were each given $250 for expenses and the prize money was announced as follows: 1st place-$1000, 2nd place-$750, 3rd place-$500, and 4th place-$250. 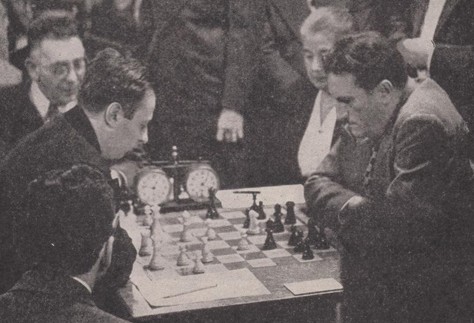 Fine vs Horowitz (Round 9)

Fine and Najdorf separated themselves from the field very early in the tournament. By the end of Round 6, Najdorf (5½/6) had a full two point lead over the field and Fine (5/6) was right on his heels with a point and a half cushion on the rest of the contestants. The two leaders were to meet in Round 7 with Fine playing the White pieces. The game turned into a Sicilian Defense with Najdorf finding himself in a very defensive position and on the verge of going down a pawn. He would try a desperate combination that found him in a hopeless ending. 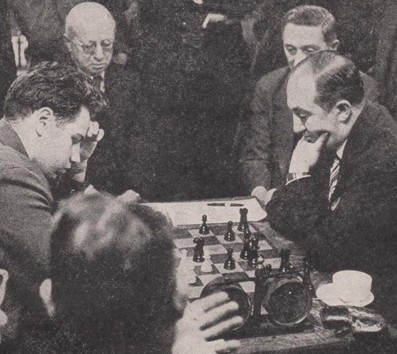 Fine won the critical Round 7 game, along with his two remaining games.  He actually won the tournament by a full point and a half, as Najdorf drew in both his final two games. Euwe and Pilnik tied for third place honors, a full three points behind the winner. Horowitz cost himself a place in the money by refusing a quickly offered draw from Fine in the final round. His reasoning was that Najdorf deserved a fighting chance to win the tournament, as he was only one full point behind Fine going into the last round. This honorable gesture and fighting spirit is something that is rarely seen in today’s grandmasters.