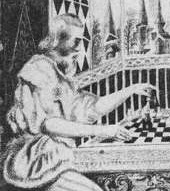 Paolo Boi (1528-1598), also known as il Bove or il Siracusano, was born in Syracuse, Sicily in 1528. He is widely considered the 3rd unofficial chess champion of the world from 1587-1598. He came from a wealthy family which helped to cultivate his intelligence. From a very young age his main emphasis was on the game of the chess.

He quickly became the best player in Sicily, defeating his three toughest competitors at the same time while blindfolded. His fame as a chess player put him in high demand from figures of patronage, such as Catherine de Medici of France and Pope Paul III. He instituted a chess academy at the palace of Prince Fabrizio Gesualdo of Venosa, where he made 300 scudi per year and met Leonardo di Cutri for the first time. With their contrasting styles of play (Boi playing faster and Leonardo more patiently and accurately) the two of them immediately established a friendly rivalry. Their first encounter over the chess board was a drawn game.

In 1575 both Boi and Leonardo traveled to the court of Philip II in Madrid to challenge Spain’s best chess players, particularly the man regarded as the best player in the world at that time, Ruy Lopez de Segura. The event was later to be considered the first true international chess competition, as well as the first to be documented.

Leonardo and Boi were both successful in defeating their opponents, but Leonardo walked away with the most victories and prizes. The two of them would then travel to Lisbon, where they both defeated the local champion, il Moro. Leonardo would additionally defeat Boi in a set match, earning him the unofficial title of world chess champion.

Boi chose to remain in Portugal after Leonardo returned home. He played chess for money, reportedly making up to 8,000 scudi in a single day. He would go on to travel across Europe and Italy playing money games at odds, offering his opponents a pawn and a move. When he returned home he would play Leonardo again in the palace of the Duke of Ossuna in Naples. The result was a drawn game and the last time these two would face each other across a chess board.

Leonardo passed away in 1587, giving the mantle of the best chess player in the world to Boi. In 1598 Boi would lose to Alessandro Salvio just three days before his death at the age of 70. It was later rumored that Boi had accumulated more than 30,000 scudi just from playing chess.