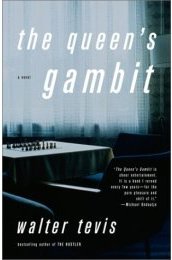 When I first heard of actor Heath Ledger’s recent and unfortunate death, I was very sad as he was one of my favorite movie actors. His performances in “A Knight’s Tale” and “The Patriot” were remarkable and have lured me into watching these two movies over and over again. I was additionally happy to hear that he would be playing the role of the Joker in the Batman Dark Knight movie sequel, which I believe he finished filming prior to his passing.

News releases covering this tragedy divulged that Ledger was a big chess fan, playing the game nearly every day. It was also reported that he would play against the regulars at a local park and although he lost frequently, he always enjoyed playing. Another interesting fact uncovered by all of this was that Ledger was set to make his directorial debut, directing a movie based on a 1983 Walter Tevis novel called “The Queen’s Gambit”.

I scoured some of the more frequented chess newsgroups and forums on the web and saw that most heavily criticized the book. Knowing from prior experiences that most chess enthusiasts are overly critical of most everything, my curiosity got the better of me and I ordered a used copy of the book online at Abe Books. I quickly read the entire novel in matter of a few days and decided to write a quick review of the book.

The story is about a young orphan by the name of Elizabeth Harmon, whose mother dies in an automobile accident when Beth (as she’s called in the book) is only eight years old. She spends approximately four years at an orphanage in Kentucky where she learns how to play chess from a quiet and mysterious custodian, who eventually gives her an old copy of Modern Chess Openings, which quickly becomes young Beth’s bible. She learns openings from the book and plays through all of them in her mind while lying in bed every night. Beth quickly begins to defeat her mentor on a regular basis, showing signs of being a born chess prodigy.

Beth is eventually adopted by a Lexington couple (Mr. & Mrs.Wheatley) just before turning thirteen and begins her journey onto a promising chess career. Her trials and tribulations are told as she goes from local tournaments all the way to international events, even battling alcoholism along the way. The regular use of chess terms and openings throughout the book keeps the chess fan in you interested and wanting to read on to the end. The author makes reference to historical chess literature (Deutsche Schachzeitung, Eches Europe, American Chess Bulletin) and expertly blends in actual chess professionals (Tal, Petrosian, Reshevsky. etc.) with the book’s fictional chess characters (Watts, Beltik, Borgov, Luchenko).

Chess openings are discussed and elaborated (Sicilian, Caro-Kann, Ruy Lopez, etc.) just enough to make the games seem a little more real and enjoyable to follow in the reader’s mind. Beth’s exhaustive preparation for tournaments and hours of hard work give a realistic insight to the torturous practice habits of true chess professionals. The only real complaint that I have about the book is the lack of drawn games, as Beth seems to only win or lose. With draws making up more than half of chess games in the real world, this was a little difficult to get used to while reading the story.

All in all, I highly recommend the book as it keeps you entertained and wanting to see what happens next. The main character was very likable and easy to identify with in many different aspects. As long as you are not expecting “The Grapes of Wrath” or some deep Shakespearian story, I would think that the casual chess fan should thoroughly enjoy this book. My hope is that the movie plans for this novel will continue on despite the tragic death of Mr. Ledger.