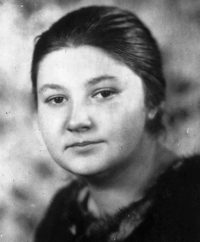 Vera Francevna Menchik (Mencikova) was born in Moscow, Russia on February 16, 1906. Her father was Czech and her mother was British. When Vera was 15, the family and she moved to England in 1921. She became affiliated with Geza Maroczy, who started coaching her in 1922.

Her record in championship play was 78 wins, 4 draws, and only 1 loss. She was the women’s world champion from 1927 until 1944 when she and her family were killed by a Nazi bomb in England, during the Second World War. She was only 38 years old.

Menchik was the first woman strong enough to compete with men and was the only woman to play in men’s international tournaments in the first half of the 20th century. In 1929 she participated in an international tournament in Carlsbad. The Viennese master Albert Becker, who played in this event, said that anyone who lost to Menchik would have to be put into the “Vera Menchik Club”. He seemingly wanted to ridicule any master who lost to this woman. Becker turned out to be the first victim (see game below) in the third round. She finished last with a score of +2 –17 =2 at Carlsbad that year.

The “Vera Menchik Club” went on to include Max Euwe (twice), Samuel Reshevsky, Conel Alexander, Edgar Colle, Sultan Khan, Jacques Mieses, Karel Opocensky, Sir George Thomas, William Winter, Friedrich Saemisch, and Frederick Yates. When the women’s Chess Olympiad began in 1957, the trophy for the victorious team was called the Vera Menchik Cup. Her peak historical rating would be around 2390 in 1931.

A fact that is not often mentioned is that she also played an important part in one of the strongest tournaments in the history of chess at Moscow in 1935. Mikhail Botvinnik and Salo Flohr shared 1st place, but it should me mentioned that Menchik’s draw with Flohr ultimately cost him the sole title. That game is shown below: